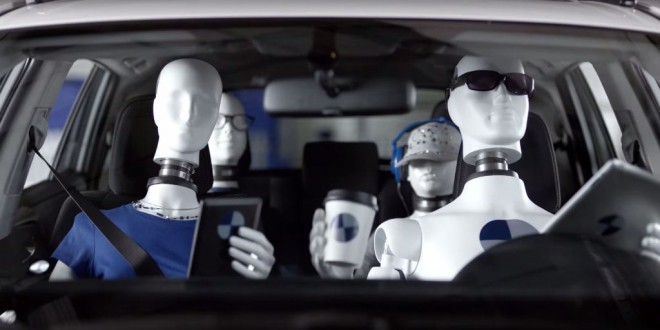 “Are we going to talk about this?” Frank asked, his neck joint squeaking as he turned to face her.

She looked to the back seat at the kids—their model didn’t have ears, so the gesture was more symbolic than cautionary.

Frank was resolute, and not just because his frame was steel. “We have a few minutes; we need to talk.”

She would have sighed if she had lungs.

“Are you leaving me for that… that… stunt dummy?” He would have cried if he had tear ducts.

“Don’t call him that, his name is Bruce.”

“He is a stunt dummy. He gets thrown off a cliff all day. Whoop-de-doo. What kind of job is that? At least we are saving lives.”

The engineer closed the doors and left.

Pam went on the defence, “He is saving lives. A human couldn’t survive those falls.”

“But we’ve been through so much! Datsuns, Toyotas… remember that Bugatti Veyron?”

Another pretend sigh, “Yes, Frank, that car was nice. But I need more than that. I can’t sit in a car in this room every day. Bruce said I could get work as a stunt car dummy. I could—”

The car started. The accelerator automatically pressed to the floor. A roar of the six-cylinder diesel engine kicked in providing a handy 53kW and 80Nm of extra grunt for those who enjoy a bit of fun to spice up their inner-city driving.

The car sped towards the brick wall at the end of the control room while cameras, lined like soldiers along the walls, created a lightning storm of flashes.

The family, not immune to inertia, flailed as far forward as their synthetic plastic limbs would allow.

After the Laws of Physics had quelled, Pam continued, “I could work outside! We’ve never been outside.”

She had a point. He didn’t even know there was an outside until they tested a car with a sunroof.

“Why would you need a window up there?” he scoffed at the time.

Pam’s mind was made up.

“They are from a different mould. They will understand”

The engineer came to the car and opened the passenger-side door. The seat belt went click and Frank’s heart, if he had one, would have sunk.

Pam was lifted out of the Mercedes and out of Frank’s life.

The engineer returned with a new crash test dummy.

Frank’s smile, if he had one, would have beamed.

iThere are no comments

Begin typing your search above and press return to search. Press Esc to cancel.